Growing up in the UK, I was exposed to cannabis in various forms during my secondary school years. For those reading from overseas, secondary school runs from ages 11 to 16. I went to a Grammar school, which requires a higher level of exam results conducted at age 10/11. I’m comfortable in saying my school was much tamer than other local comprehensive schools.

I was age 13 when a friend of mine was having a tough time with family issues at home—a mother with cancer and a father without compassion. Let’s call the friend Adam.

Adam was a nice kid at heart, he was smart and had a wicked sense of humor that resonated with my own. He was into off-roading with motorbikes, practiced some martial arts and enjoyed generally other “cool” stuff teenage boys are interested in.

I’d already tried my first cigarette before meeting Adam, but when we had regular access, I began to “bum” a few puffs each break time and before and after school because it was easily accessible and had a rebellious notion to it.

I was hanging out with Adam outside of school one day and went to meet some friends of his. It turned out these friends were a source of hash or hashish (cannabis resin in brown block form—much milder than typical cannabis plant leaves). I remember Adam being keen to try it and was excited to be doing something at the next level of rebelliousness.

Quite quickly Adam made the necessary connections to access cannabis in leaf form and preferred the stronger “high” it produced, Cannabis became his primary, regular drug of choice. Adam would also compliment this with a 6 pack or more of Fosters (UK distributed beer) where possible—I would have a few beers myself.

It then became quite the norm for Adam to bring cannabis to school, either in pre-rolled joints or sometimes actually gathering enough money from others to buy a bag from a local young dealer who would complete the deal through the fence at the back of the field.

Adam’s main objective of the day would be to get high before certain lessons, and I watched as a social group formed around us—primarily other kids who were curious about drugs, in awe of his sheer courage to do cannabis in school—and others who had that rebellious hormone kicking in and noticed Adam was leading the charge.

Other kids experimented with Adam, some just taking some puffs when a joint was handed out and others who became regular investors and cemented their own relationship with cannabis. As we grew older, cocaine became the next level drug Adam could access where most of the group couldn’t. Almost as a duty or status, Adam would source, use and sometimes share coke with other kids—although cocaine was mostly taken outside of school where alcohol and a full Saturday session was in play.

We had left school before I became exposed to other class A drugs, such as Ecstasy and MDMA—which was much aligned with the over 18s clubbing and party scene that I was coming of age for. By the time I turned 18, I’d lost contact with Adam and was exposed to these other drugs via other friends I had made.

I can reflect on Adam, and how a tough situation at home had led him to become more destructive—at school, when socializing and also in private. Adam’s access and use of drugs directly influenced a number of other students to then have access and experiment—some as just a passing interest and for others, it became their own downfall.

I saw many different types of student try drugs and become regular users—even addicts. They weren’t all from poor homes, weren’t all having a hard time at home, and weren’t all doing it for the actual high. Not all of them became addicted.

I guess the main thing to highlight here is that if one source of destructive behavior and experimental drug use had been prevented; the multiplication of drug-using students within our school would have been much more limited—if not reduced completely. Also, not all kids become addicts because of tough times at home or destructive behavior—it can simply be down to circumstance, access, social pressure, opportunity—or even because they believe drugs enable them to be better than they could be without them.

Every individual affected by drugs is different—they all have their own story of how they began, how it escalated, and where they are now. Narconon UK helps rehabilitate people from all over the world—including the UK, EU, and the Middle East. People of all ages are able to recover themselves and get back to being something greater—without the aspect of addiction restraining them from living their lives.

One of the most destructive sides to cocaine is “the cut.” Suppliers like money and to make more of it, raw cocaine is mixed with a variety of products. Even flour and chalk are used to say nothing of strychnine…

All Hail the New Medical Disovery—Never Mind Addiction to It

Starts with Cocaine, followed by crack cocaine, became the drug of choice in many of our UK big cities like London and Manchester in the 1980s. By 2002 crack importing and addiction reached epidemic proportions. Seizures of it had increased by 50% and the numbers of crack addicts seeking help by 54%. 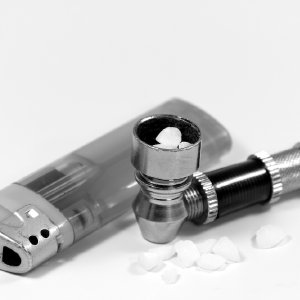